Analyzing Cubism, IMMA’s latest exhibition, brings fresh and renewed focus to a number of Irish artists working in a Cubist idiom through the twentieth century. Among those included is Mary Swanzy (1882 – 1978), who was among the first generation of Irish women artists to travel to Paris, where she immersed herself in art, both in terms of education and her social life. From a young age, Swanzy had travelled widely and this was something she maintained through her life; visiting Czechoslovakia, where her sister worked with the Red Cross during the First World War, and Yugoslavia, before travelling on to Honolulu, Samoa and California in the 1920s. After this, the artist settled in London, returning to Ireland for a short time during the Second World War.

Like many artists of this period, Swanzy worked with different representational styles during her career, moving through different phases. For me, some of her most interesting work post-dates that in the IMMA exhibition, and is altogether darker and more questioning of human life. Here’s just a few examples of this work, it is included in some national collections and the Pym Gallery have produced some well illustrated catalogues that include these later paintings. 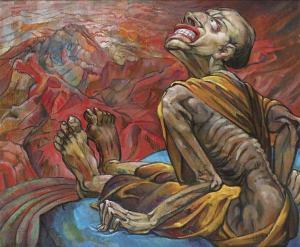